Major Storm for the Northeast 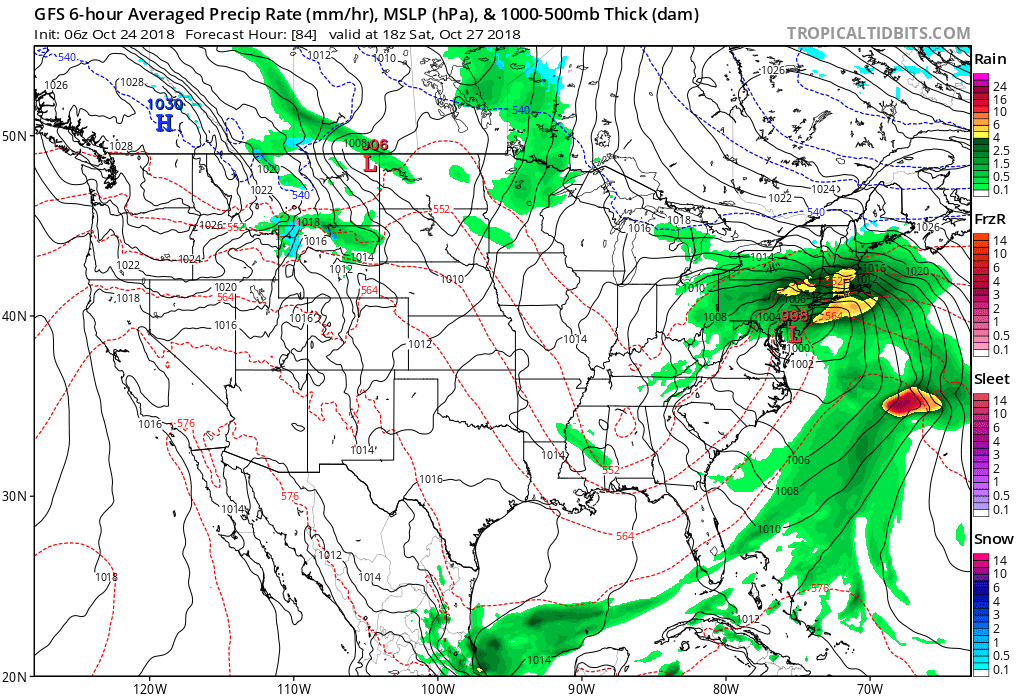 This blog entry will focus on the potential for a major storm, looking at the daily operational models and how they are handling the event.

Wednesday October 24, 2018 10:00 am EDT – I am not saying much because I am still waiting for Willa to clear the mountains and move into Texas. You can see on the satellite image, it’s almost there so that means we will get a better idea on how potent the system will be and implications down the road for the Northeast. Right now it appears that heavy rains and gales along the coast will be the main impacts with snow confined to the far Northeast. My gut tells me that a crashing NAO and storm on the coast will produce wet snow back in the Appalachians, much to the surprise of many forecasters.

Tuesday October 23, 2018 7:00 am EDT –  The model’s seem to be in agreement that a storm is coming and that storm will track up the East coast with heavy rains and gales. I posted a map below showing the GFS 10m winds along the coast and as you can see the beaches will be very windy with gusts up to 40 mph from Maryland to New England.

Snow has been the tough issue and I am not sure if we will have the answers until later this week when the hurricane moves through Mexico and the models can resolve how cold it will get for snow. I am sure we have a big storm coming and typically you get a swath of heavy snow even in October. I am just not sure if that snow is in the central Appalachians or across the Northeast.

Monday October 22, 2018 7:30 pm EDT – I think the issue with the models is simply how to handle a CAT 4 hurricane in the Pacific that will cross into the Gulf of Mexico. In addition, we have a blocking pattern setting up and a vigorous trough coming into the Eastern U.S.

So what do we know as of this evening.

I still think at my house here in central PA we get snow this weekend.. how much not sure just yet.

CMC which is Warmer

Monday October 22, 2018 7:30 am EDT – Hurricane Willa will cross Mexico and move into Texas and the Gulf Coast later this week. That means more heavy rains for Texas, hopefully south of Austin. It also means that Willa becomes the Northeast storm as it gets drawn into the trough this weekend.

Now that we have Willa, the models should be able to handle the outcome of the storm a little better. It seems the ECMWF model is a little more consistent with each run now while the GFS is still having issues. The CMC model is my model of choice right now because it shows what I think will happen. Of course, it gives me a foot of snow up here in the Appalachians. I am also leaning toward the ECMWF model because it seems to be the more consistent of the models in regards on how it’s handling the storm. 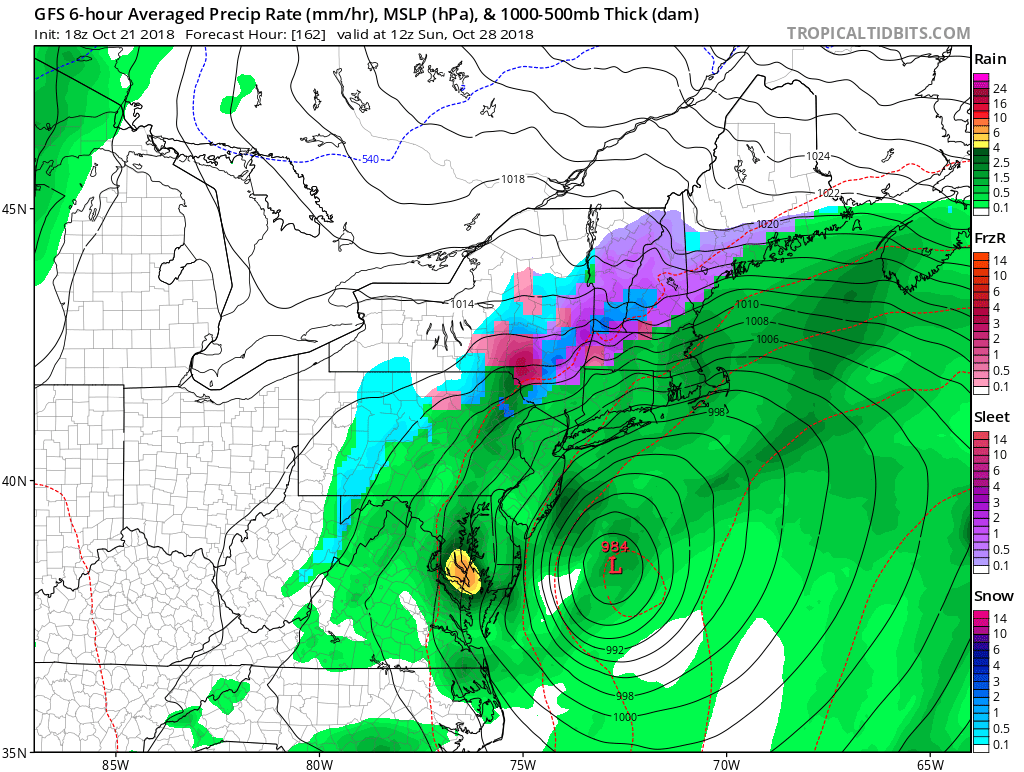 Sunday October 21, 2018 4:30 pm EDT – The ECMWF came out this afternoon and it shows what I think will happen better than any model I have seen yet. It brings the low out of the Gulf and up the East coast then wraps it into the upper level trough as it comes into the East in a negative tilt fashion. This will produce a major storm with snows in the Appalachians as shown on the snow map from the ECMWF. New England would get gales and heavy rains. October storms can be big storms with produce heavy snows.

Sunday October 21, 2018 12:30 pm EDT – 12Z gfs kinda of showing what I am thinking with tropical like feature being drawn into the trough. Someone is going to get a lot of snow. Not sure where yet, but storms of this magnitude produce a lot of snow. 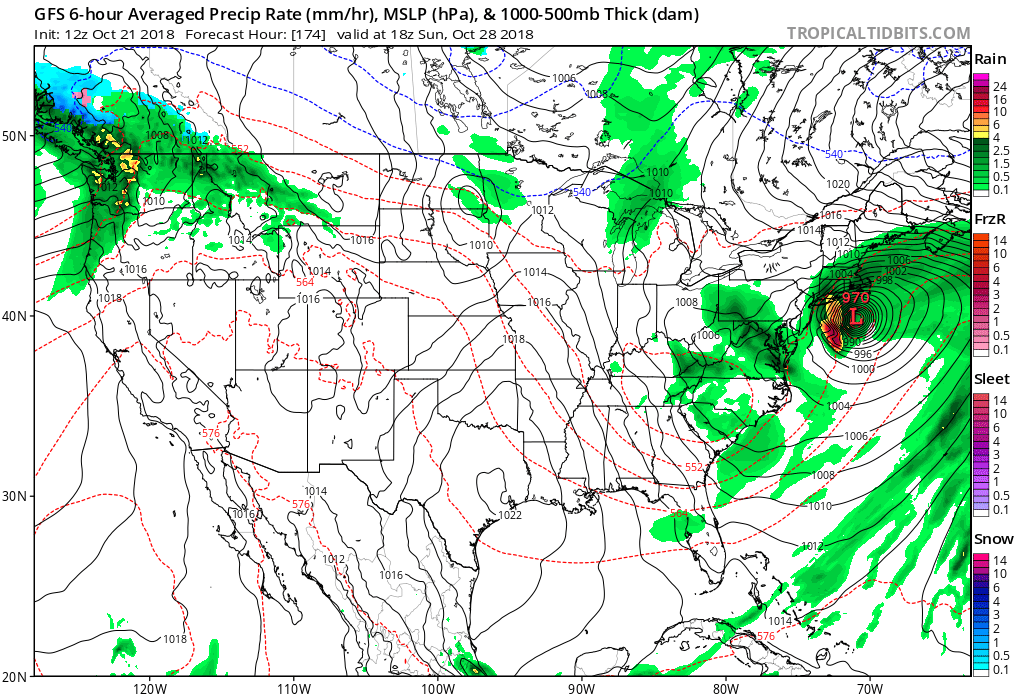 Sunday October 21, 2018 8:00 am EDT – The models seem to be moving into a direction of the first storm being the bigger of the two and the second being the colder of the two. We still have all week to look at the storms and as one on my blog folks said, it’s “model warfare!” This is the fun part of weather forecasting, trying to figure out how the pattern will come about with the storms.

The NAO is going into a major plunge this week and that should lead to a major storm along the East coast. I think the 6z GFS as shown below is probably showing what I am thinking will happen that a tropical origin storm gets drawn into the trough to produce one heck of a storm. I just may have to bring the Big Daddy hat out again.

Saturday October 20, 2018 8:00 am EDT – The NAO index (see link above) continues to take a major drop next week which indicates a blocking pattern is setting up and we should have a major storm along the East coast.  However, the operational models continue to have issues with how the storm comes about due to a tropical connection. They seem to be in agreement that something tropical comes out of the Pacific, crosses Mexico and hooks up with the old frontal boundary across the Gulf Coast. As the trough comes into the Mississippi Valley, the system along the East coast explodes into a storm. But is that the storm or is the next system associated with the trough the actual storm or does the tropical system get drawn into the trough as suggested by some models.

My feeling is, the tropical portion of the storm gets drawn into the entire trough as one storm and not two storms. The impacts become snow in the Appalachians, gales along the coast and widespread heavy rains. Where these occur is what this blog will focus on over the next several days.

Click on the maps below to see the latest operational models.

3 thoughts on “Major Storm for the Northeast”

Weekly Highlights – Stormy Across the East and More Mountain Snows