Is a Big Daddy Snowstorm in the Making for the Mid-Atlantic and Northeast Next Week?

Posted on November 5, 2019 by Henry Margusity 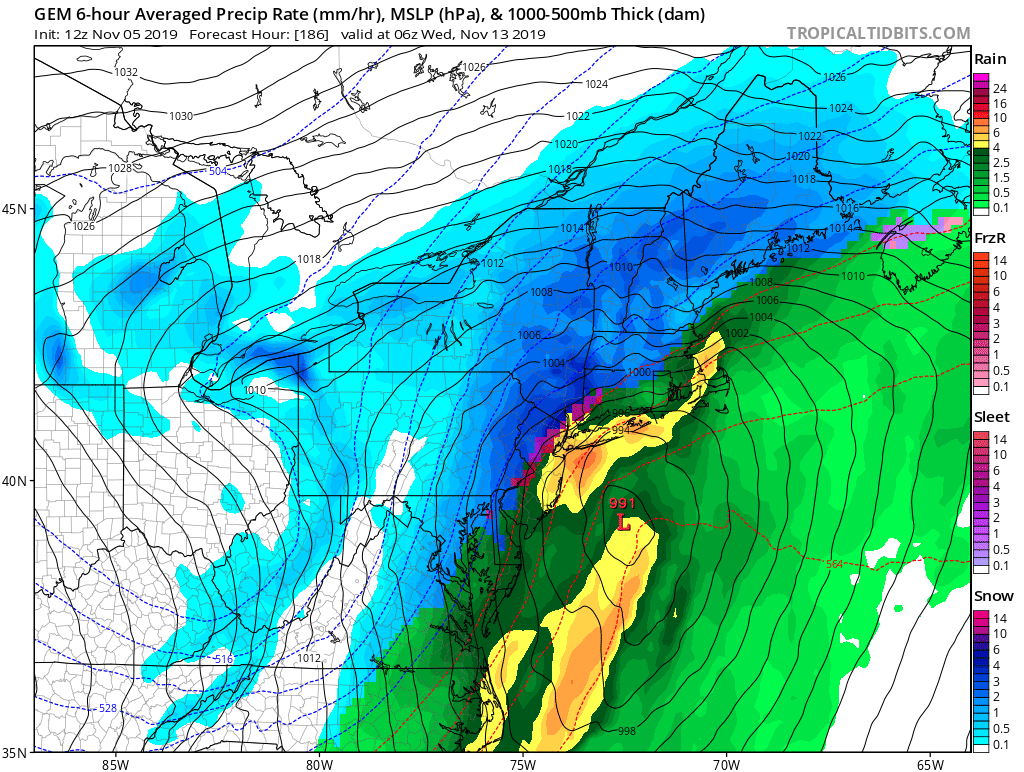 Severla models are leading the way for a major snowstorm for the Northeast next week. The ECMWF has been the model of choice showing the storm since yesterday. The CMC and NAVGEM have also gone in the direction of the storm but once again the GFS remains the outlier. While the GFS does show as storm well off the coast, it does not wrap the storm into the coast like the other models.

Lets keep in  mind that the storm coming Thursday was not well handled by the GFS so that makes one think the GFS will evetually catch with the other operational models.

So what do I think. Well, NAO is neutral to slightly positive which is not a good indicator for the major snowstorm. That says no blocking and no major storm. However, major storms have occurred with a positive NAO which Kocin has shown in his Northeast snowstorm book.

The PNA is negative to neutral which is another indicator that the trough really is not going to dig so deeply into the East.

You can see on the GFS, CMC and ECMWF the differences in the 500 mb pattern where two of the models really dig the storm in while the GFS is flatter. more of what you would see with the NAO and PNA patterns.

One thing that is going for a storm, is the drop in the La Nina SOI index. Have have seen a pretty drop int he SOI values which means a stronger La Nina that would ripple into a sudden blocking pattern and more positive PNA which would lead to a storm. We saw how that last drop int he SOI produce tropical systems and very strong storms in in the east during October.

One Snow Streak in the Midwest, the Other in the Northeast!

While the indicators are going against my best judgement, I am leaving the door open for the potential only because what I am seeing in the Pacific.

← One Snow Streak in the Midwest, the Other in the Northeast!
Snow Today through Thursday…Big Daddy Snowstorm Next Week? →

2 Comments on “Is a Big Daddy Snowstorm in the Making for the Mid-Atlantic and Northeast Next Week?”