Posted on December 1, 2019 by Henry Margusity 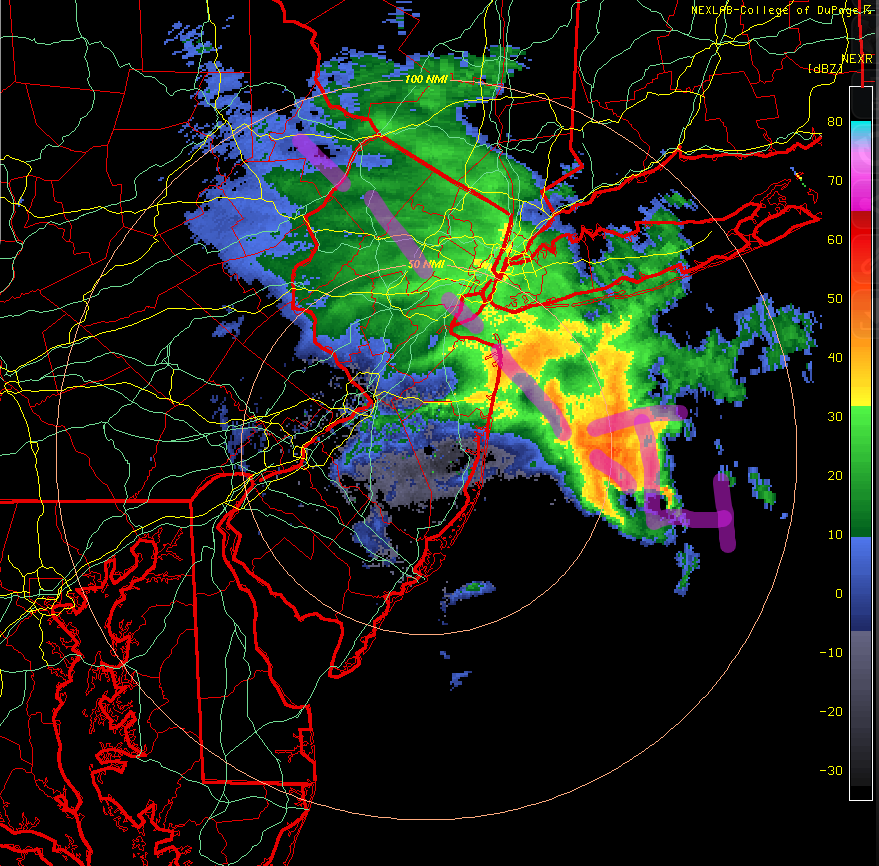 I will keep this going while the storm is in progress:

The inverted trough continues to hang in through NYC into northern NJ this hour but radar trends seems to show the snow area starting to shrink. HRRR model trends shows that snow are will be breaking up over the next 5 hours so the heaviest snows will fall now and gradually diminish heading into the evening.

The storm will begin to translate to an eastern New England and eastern Maine snowstorm tonight into Tuesday. We should see heavy bands of snow setting up from Rhode Island to coastal Maine by early Tuesday morning. That area will see over 4 inches of snow. 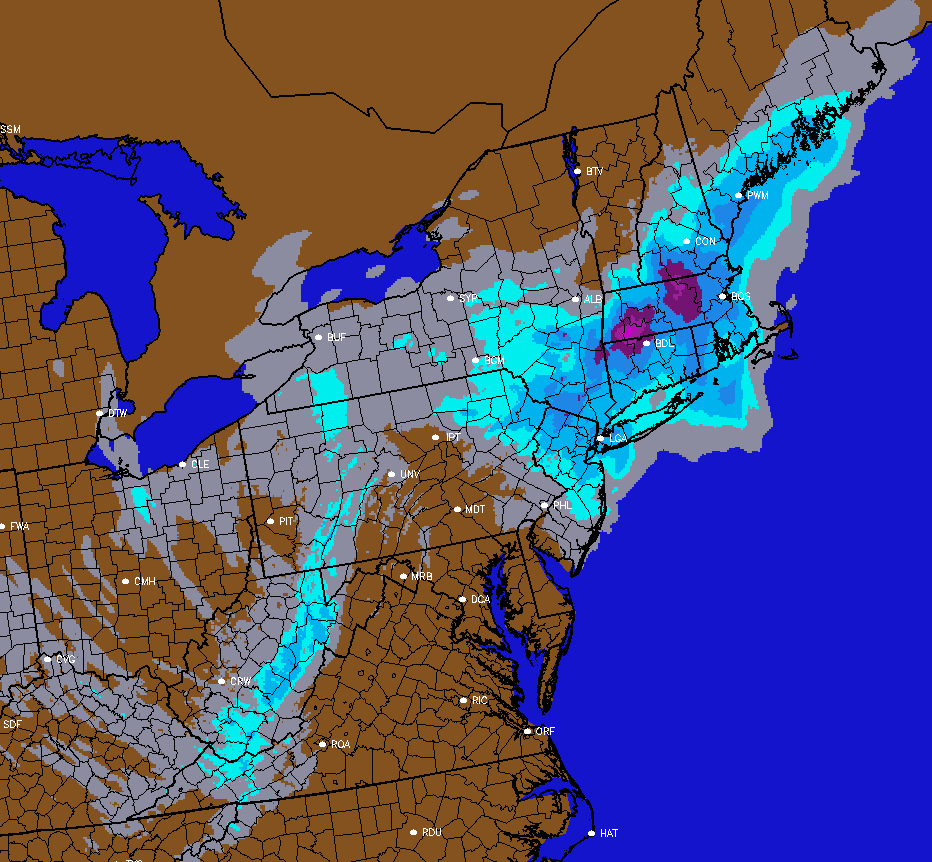 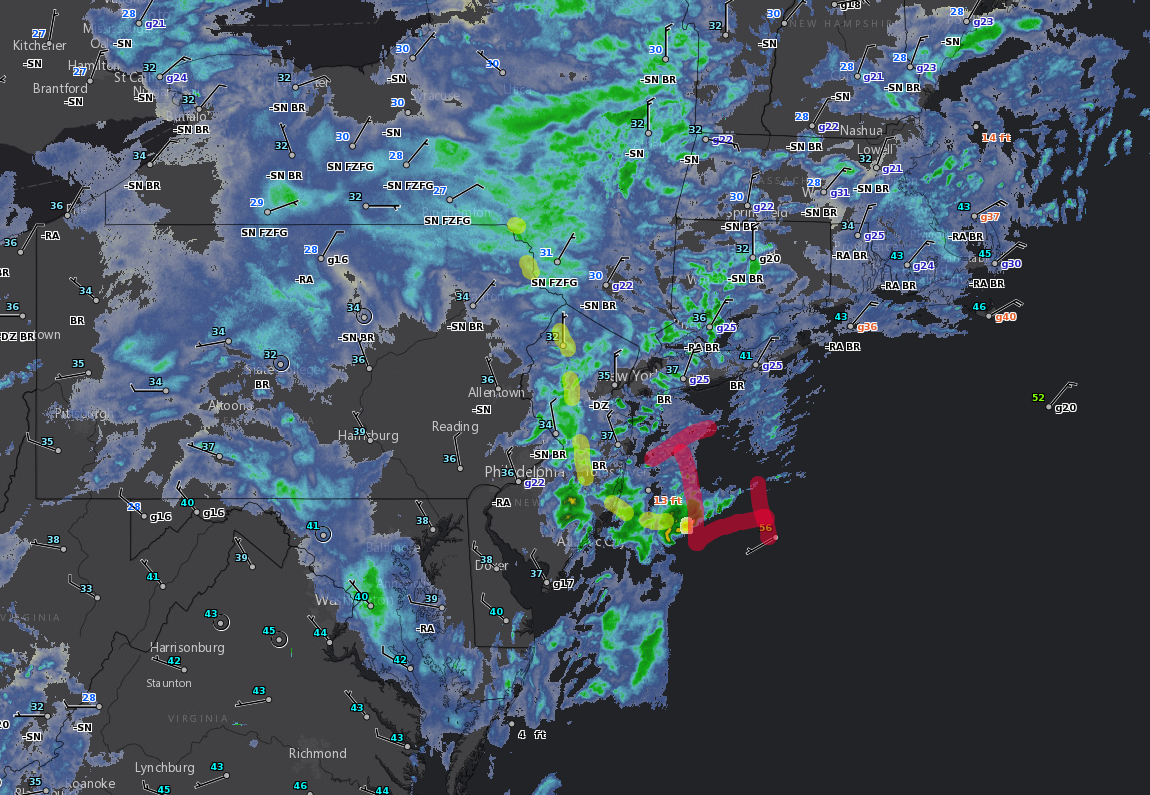 Thunderstorms are developing off of New Jersey which is a sign that the surface low is now going through the intensification process. The inverted trough where the heavy snows will focus on this afternoon now extends from that surface low through New Jersey into the Poconos. We should see that trough pivot some to become SE to NW this afternoon, placing northern NJ into the heavy snow banding.

The HRRR model continues to show the heaviest bands across NJ into PA and New England. I think that is correct given the current surface setup. 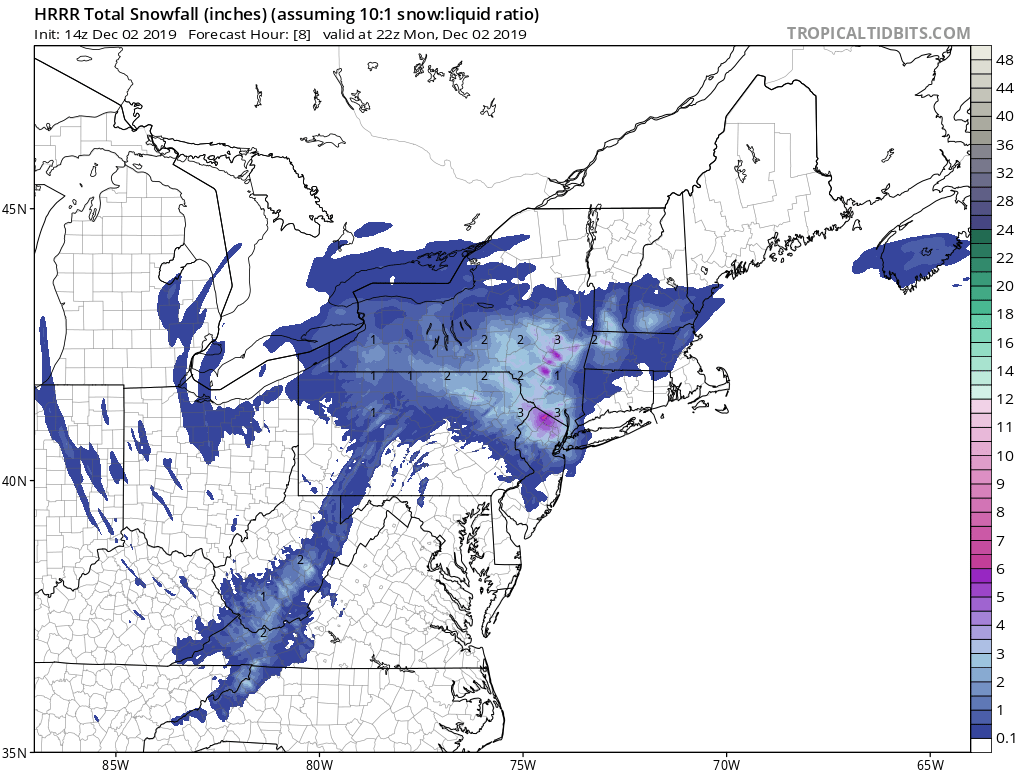 Low is forming off New Jersey now as the upper level low is getting ready to stack up over it. Snow has been across Pennsylvania and blotchy snow has been across New York and New England. We should see snow consolidating across eastern PA into New Jersey with the inverted trough activating across northern New Jersey by this afternoon. Amounts in NJ will range from 2-10 inches, but being a wet snow, amounts actually on the ground may be less. Even New York City will see snow today, an it can snow hard in the city.  Shown are the two models NAM and HRRR showing snow amounts. Notice that both are hinting at the inverted trough across northern New Jersey into the Poconos. 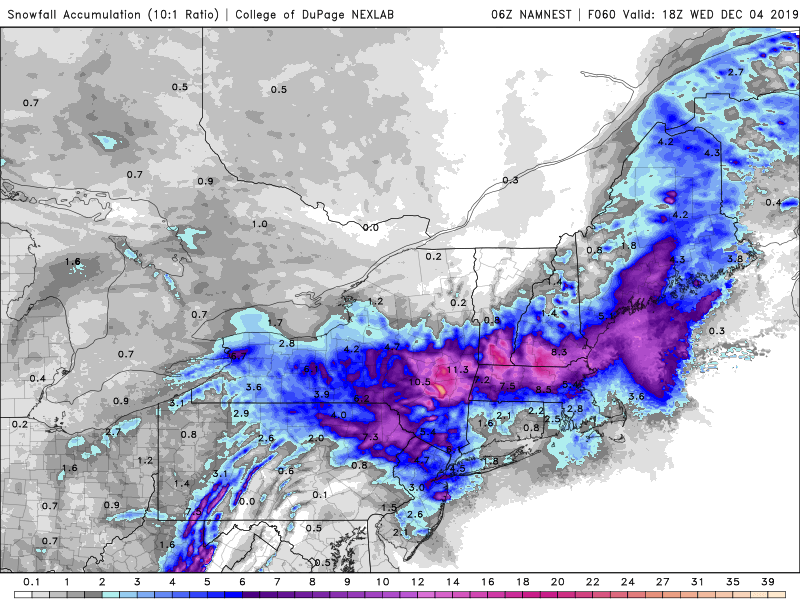 Thunderstorms have raced across western Pennsylvania this evening, some with hail and gusty winds. That area of thunderstorms will come to a halt across central PA and actually pivot overnight as the upper level low comes into play.

The surface low is now sitting and waiting for the upper level low off of The Dalmarva. The surface combined with the upper level low will become the new storm later tonight and Monday, and the storm that will bring heavy snow from central PA into eastern PA, New Jersey, southeast NY and New England. New York City is a tough forecast because I can see anywhere from nothing to 6 inches. I do believe the city will get snow as will Philly and maybe as far south as Baltimore. I also expect some surprise snow amounts to show up by the end of the day Monday. 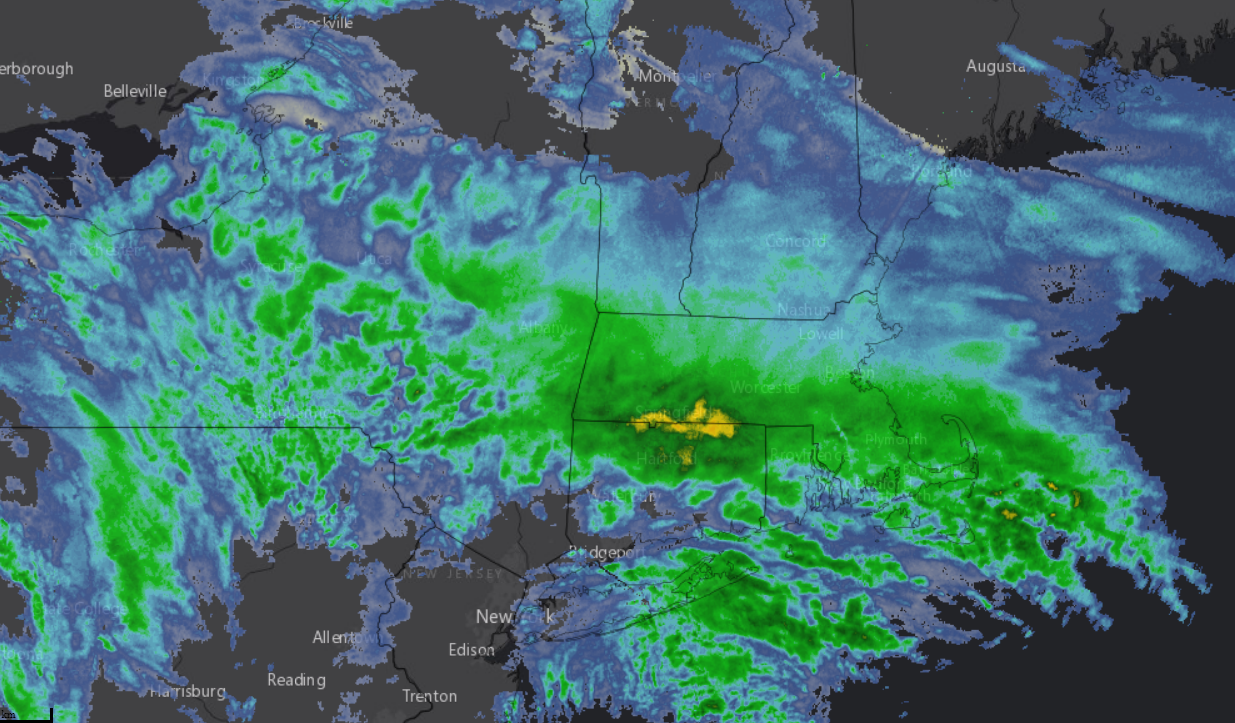 Snows continue to fall across eastern New York into New England this evening. Some places have seen several inches of snow and more is on the way. The bright band you see on the radar, is where the change over to sleet and freezing rain is occurring along the South Coast.

The HRRR and Latest NAM model seem to be finally figuring out the complexity of the storm development. Latest surface analysis shows low pressure over The Delmarva with the cold front just coming of the Appalachians and the Upper Level low over the Ohio Valley. 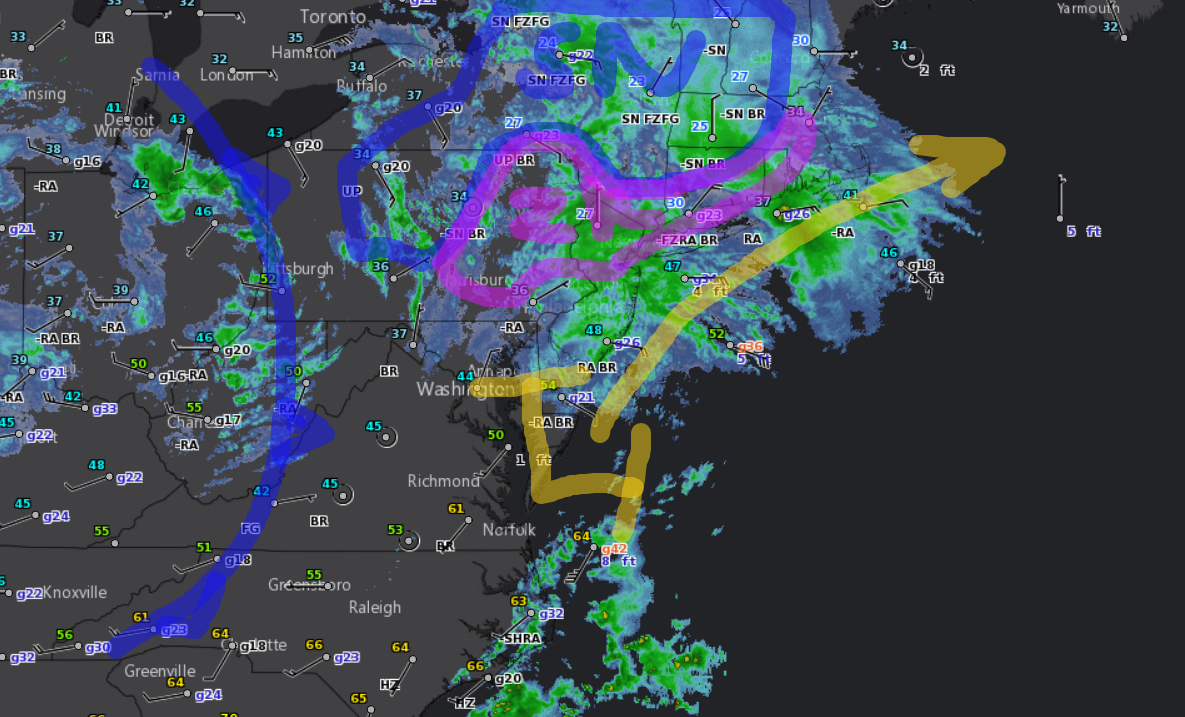 The surface low is waiting for the upper level low to reach it for intensification which should occur later tonight and Monday. 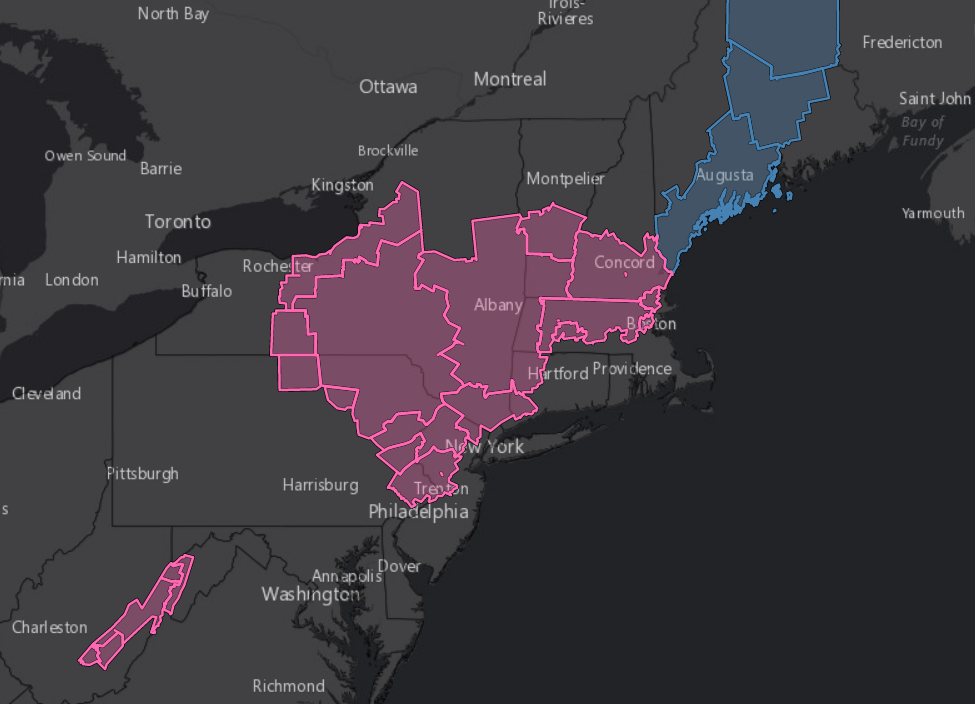 NWS has put out heavy snow warnings for New Jersey with 6-12 inches of snow based on the NAM and ECMWF.