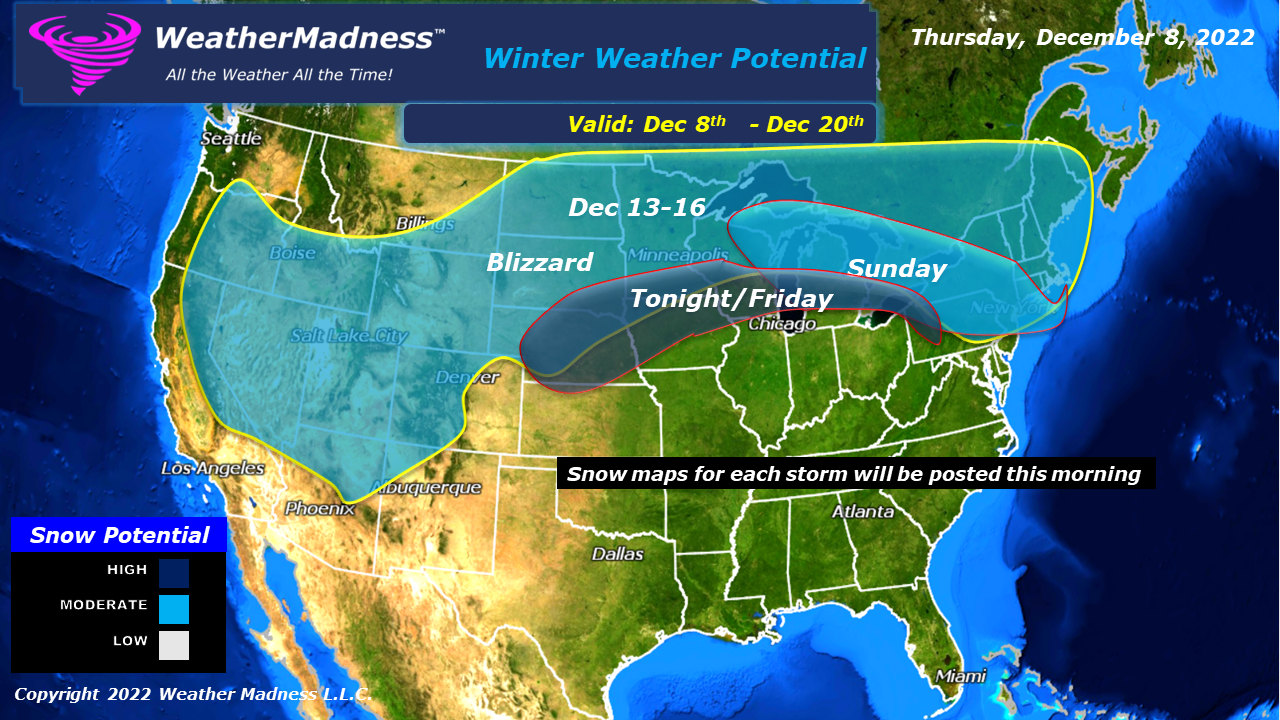 Short Range:   We have at least 3 snow events coming between Tonight and Tuesday so I plan to do snow maps later this morning once all the morning information gets out.

The first snow event will develop in the central Plains tonight and move across the southern Great Lakes tomorrow, btu will dwindle out moving into the Appalachians.

The second event comes across the Great Lakes Saturday night and into Ontario, PA, NY Sunday, New England Sunday night. This will be a 1-4 inch snowstorm that could even get into NYC.

The third event will be the bigger event and will move across the West this weekend and into the Plains Monday and Tuesday. Once in the Plains, a blizzard will develop and hit the Dakota’s. Front end mix precipitation will hit parts of the Great Lakes and Ohio Valley next week. Severe weather will be the other aspect of that storm, so expect a busy map.

Long Range: Now the fight is on as the indices will be fighting the last gasp of the La Nina. There are signs now that the PNA is going positive will means colder weather is coming into the East during the holidays and will stick around through early January. Because the La Nina strengthen a bit we may see shots of very cold weather and sustained cold weather across the northern tier of the country. With all that said, swaths of snow and mix precipitation will be moving across the country and will add into the issue will be the warmth across the South that will be forced into any west to east moving storm. Surprise, we may see snow amounts more than what one would think. Case in point, Sunday I will not be surprised to see locally 6 inches of snow across parts of PA, NY and northern NJ because the warm air gets forced into the colder air. It may happen across the Plains and Midwest around the 22nd as yet another storm taps the warm weather and cause excessive snow and ice amounts. It’s going to get wild to say the least!

Severe Storms and Possible Tornadoes Across the South

Updated: The First Storm Brings Snow from the Midwest to the Northeast with Some Mix