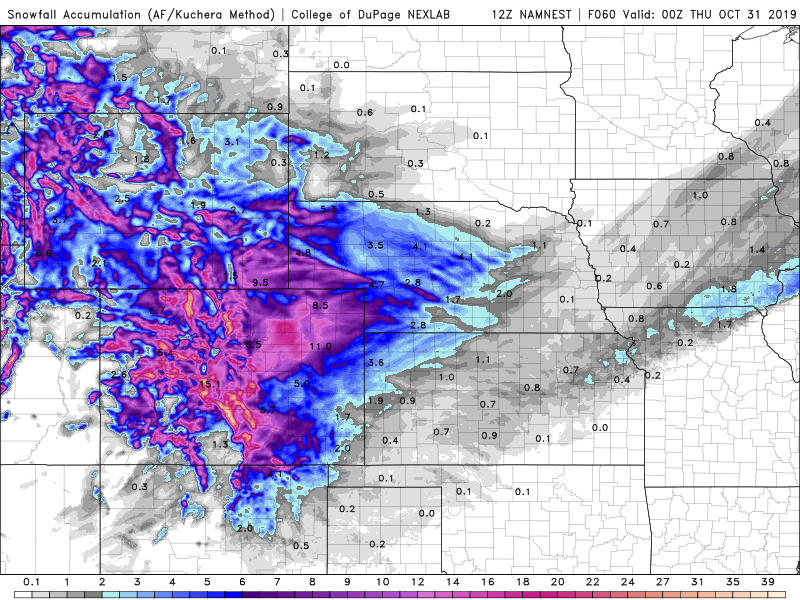 A two shot snow event will occur this week letting us know that winter is on the way. Denver was hit this morning with snow and now a bigger snowstorm is coming to Denver to Madison, Wi, perhaps even the Upper Peninsula of Michigan.

While Denver is going to have 4-8 inches of snow with over a foot in the mountains, snow coming into the Plains and Midwest will be 1-8 inches depending on location.

The 10:1 ratio computer models are showing over a foot of snow but given the time of the year, we are probably looking as less, that’s why I am showing the Kuchera snow amounts which take into account snow ratios.

The first storm is comes out tonight with light snows across the Midwest and Plains. The second comes out of the Rockies Wednesday and heads in the Great Lakes Thursday night. Models still differ some on amounts, but going with the low ratios of 8:1 we are probably looking at 1-8 inches of snow. Despite all that, travel be poor in Denver, probably slushy and slippery into the Plains and Midwest.

Notes: This product shows solely the total amount of snowfall using a solid-to-liquid-equivalent ratio derived from the Kuchera Method. Where Tmax represents the maximum temperature in the lowest 500mb in Kelvin, the Kuchera Method uses one of the following two formulas to approximate snowfall ratio based on the value of Tmax being greater or less than 271.16K (~28°F or ~-2°C).

The snowfall amount is then calculated by multiplying ratio by the forecast QPF. The amount displayed is cumulative, starting at the beginning of the model run and accumulating throughout the entire forecast period.

Below are the computer model snows. I like the NAM amounts thinking that GFS is too high on amounts.

Rockies to Midwest Snowstorms,
Severe Weather May Include Tornadoes!
Links