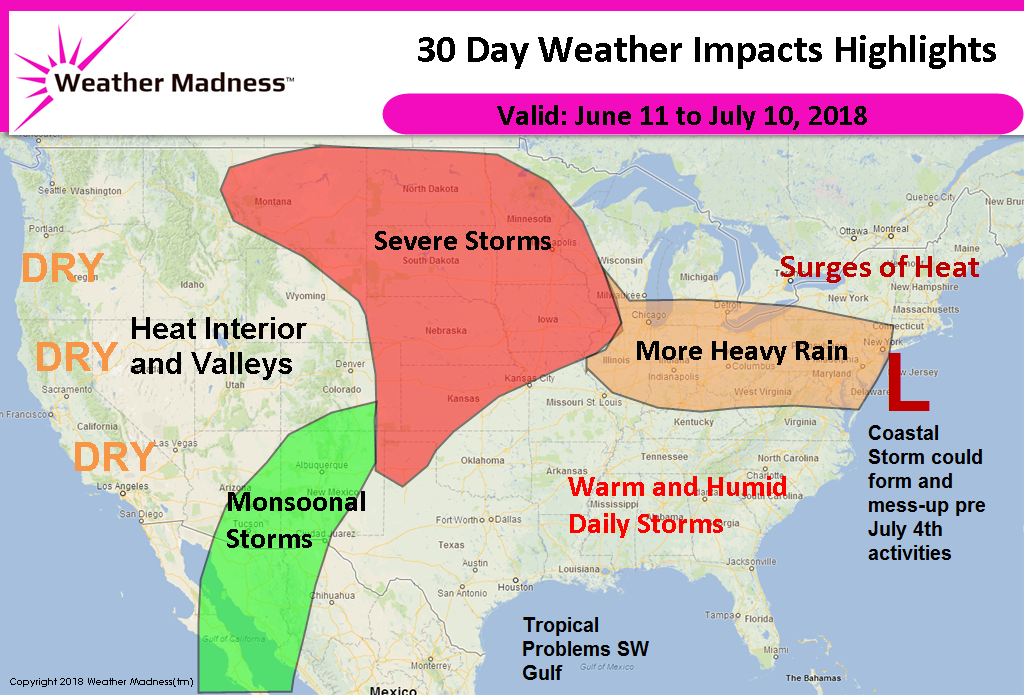 Overall, I am not looking for major changes in the pattern. The weak blocking across the Northeast will give up some allowing surges of heat into the Northeast. But the heat surges will come with a cost. Old boundaries will be stubborn to move allowing for the corridor of heavy rains to remain from the Midwest into the Mid-Atlantic. I am not saying we will see daily barrages of heavy rains, but when it does rain, some areas will see inches of rain. In some cases, the rains will come from all thunderstorm complexes that form in the Plains and move under the jet and along the old fronts.

I don’t expect any prolonged heat into the East and Northeast but surges of heat. We may see a few days with temps up in the 90s, but I think that will be the exception and not the rule.

In early July, there are some indications that the jet buckles allowing a coastal storm to develop off the Mid-Atlantic. This may occur close to 4th of July and could mess-up beach time prior to the 4th. Worse case would be back door cold fronts and chilly, drizzle weather behind a coastal storm.

Severe weather will remain in the Plains during this time, especially from Montana to Minnesota. It’s not out of the question that we see a few rounds of tornadoes as a strong jet will come into across the Pacific Northwest into the Northern Plains.

The West to me is tricky. While dry and hit weather should remain across the California Valleys into the interior West, I can see thunderstorms developing over the mountains from about Mid-Month on.

The Southwest will see at least one perhaps two Pacific tropical systems that will ignite the monsoonal flow. While not a true monsoonal flow, there will be scattered showers and thunderstorms that will break the heat and bring the potential for flash flooding and dust storms.

Southwest Gulf is where I am watching right now for development the next week or so. It would appear that most of the tropical problems will be suppressed south for now but close in development is something that remains on the table as the ridge builds in around Mid-June. The South is into the summer pattern with warm and humid weather and daily thunderstorms.

Updated Sunday AM: Ian May Redevelop Off the Coast of Maryland